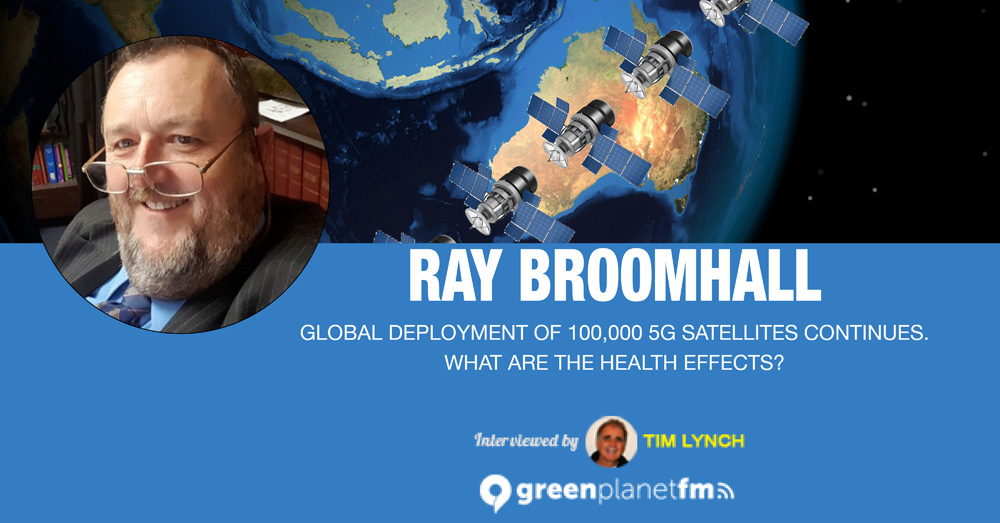 Engulfing the entire planet via 100 thousand satellites, millions of telecommunication towers, small cells and billions of 5G connected devices flooding
the world with invisible electro smog pollution in the form of electromagnetic radiation.

The 5G rollout will increase man-made electromagnetic radiation at unprecedented levels with little to no concern for the safety and wellbeing of the humans
who will be exposed to it.

In Australia concerned citizens have formed a political Party called the ‘NO 5G Party’ - that will be in every state across Australia. Ray is the president
of it at the moment and they have a thousand members and at the next General Election they will be running candidates in every State, specifically
on electro magnetic radiation issues. Also, its a Party to educate people that there has been a unprecedented upgrading and building of Mobile telephone
towers and ‘small cells’ for 5G across Australia - saying it has been happening here in NZ and that most people have no idea that this is happening
as we read to this.

That in Australia all the Telcos are eagerly waiting the Australian Govt’s 5G 26 Gigahertz frequency sale. We know that the 26 Gigahertz band is a frequency
that is billions of times higher than the frequencies that we have been exposed up to now. Thus is very problematic health wise. The will come to NZ
too.

This will mean that 26 Gigahertz Non ionising electro magnetic radiation penetrates our bodies.

26 Gigahertz Non ionising electro magnetic radiation penetrates our bodies. Through both skin and tissue at 26 billion pulses per second.

Compared with only 50 pulses per second as found in the 50 hertz frequency - as irradiated by many of the electrical appliances around the home.

Vodafone in this interview admits that the radio wave penetrates the skin - listen. And Ray says that he is sure that people do not consent to that.

Some frequencies penetrate the skin to a depth of 8.1 millimetres.

ARPANSA.gov.au - the Australian Radiation Protection and Nuclear Safety Agency - listen to about
Dr Ken Karipidis - is an expert on how radiation affects the human body.

What this has come to is humanity is being assaulted

These wireless frequencies are an assault on the human body. This is where the battle lines are.

Electro magnetic radiation is a force and if you do not consent to it - then who ever is touching you or penetrating you - must stop. Otherwise it is an
offence under the Crimes Act 1961.

Listen to this interview: Of Dr Bruce Hocking’s research with children in Australia in 1996 - irradiated from 3 broadcast towers in Sydney NSW. LISTEN
- he found that there was a 60% increase in childhood deaths from childhood lymphatic leukaemia in the immediate vicinity of those towers. His was
a time when the frequencies were far lower than todays frequencies.

Listen to 19 children dying with lymphatic leukaemia in Rome Italy when the Italian supreme court found them guilty due to them living in to closer proximity
to the Vatican radio station.

Mobile phones were introduce in 1981 and the sharp increase in childhood leukaemia is no coincidence. Have a listen.

Ray also mentions that a sleeping virus that is dormant in a human body can be reactivated when exposed to non ionising radiation .This is important information.

This is about regarding Satellites in low geo stationary orbit. Ray’s team have filed against Elon Musk and other satellite providers in exposing Australians
to electromagnetic radiation from satellites - because they do not know what degree of exposure Australians will be exposed too.

Synapses and nerves are affected as well as cardiac muscles. There appears to be no cure for exposure to non ionising radiation.

Ray says that the new wireless towers are pumping out very powerful radiation - have a listen.

Stopping this radiation in Australia is schools is becoming very concerning in schools - a duty of care issue - if wifi is throughout schools - they are
technically assaulting the children.

100,000 SpaceX lanced satellites will be up above our head in the next 5 years - plus high altitude platform stations. (see previous interview of Ray)
mostly launched from Australian soil - at Wyndhamlaunched into the stratosphere - they are like a giant drones that can stay up there for months.

Get this! - Each Orbiting Platform is going to be the equivalent to 1,800 base stations, each … they will circulate in a 200 kilometres circumference
and they will have a seamless connection to earth base stations. They are designed to connect to high altitude satellites as well as our basic telephone
towers,

There is another reason why this is all happening - your mobile phone will be able to be charged from these flying platforms and you will never have to
plug your mobile phone into the wall to get it charged - ever again . Note, there is no mention of the health effects from all the electrical charges
and frequencies that we find ourselves immersed in.

No health affects have been factored in. The flying wing will via wireless electricity charge your phone from then on.

Ray further says that it’s planned that all your appliances in your home will be powered this way - TV - radio, toaster you name it. Even your electric
car is supposedly planned to be automatically charged (what a fantasy). Wireless power transfer has been around for a long time. Nikola Tesla was planning
to do this over a hundred years ago and had completed the preliminary testing and it worked. But, in those days, there was no way to ‘monitor it’ and
‘charge for it’. So JB Morgan, Tesla’s financier not wanting people to have free transport and pulled the plug on Tesla. The battery powered Tesla
cars of today - are a compromise.

Even high voltage powerlines - have affected the birthing rate of cows and Ray on behalf of some pastoralists - have taken the Power companies to court
and won - Have a listen.

Tell the Telcos that you do not consent to being touched by wireless radiation - and then communicate with these and other Telcos about it - and to stop.

Electro magnetic hypersensitivity is on the increase globally - especially in cities - known as EHS it’s an established medical condition.

We briefly cover the Nuremberg II Trial that is coming up up in September - supposedly on the Isle of Man near England. to counter all the lies being Propagated
by MSM and big PHARMA - lock-stepped with the political process in the Western World

That chemists and nurses are now giving jabs - not doctors - begs the question is this professional conduct in relationship to informed consent? Remember
the hippocratic Oath - First di not harm.

Rocket Lab here in NZ and putting satellites up across NZ and around the Southern Hemisphere. Legal liabilities from space debris.