Glen Atkinson: Astrology is a fact of Physics 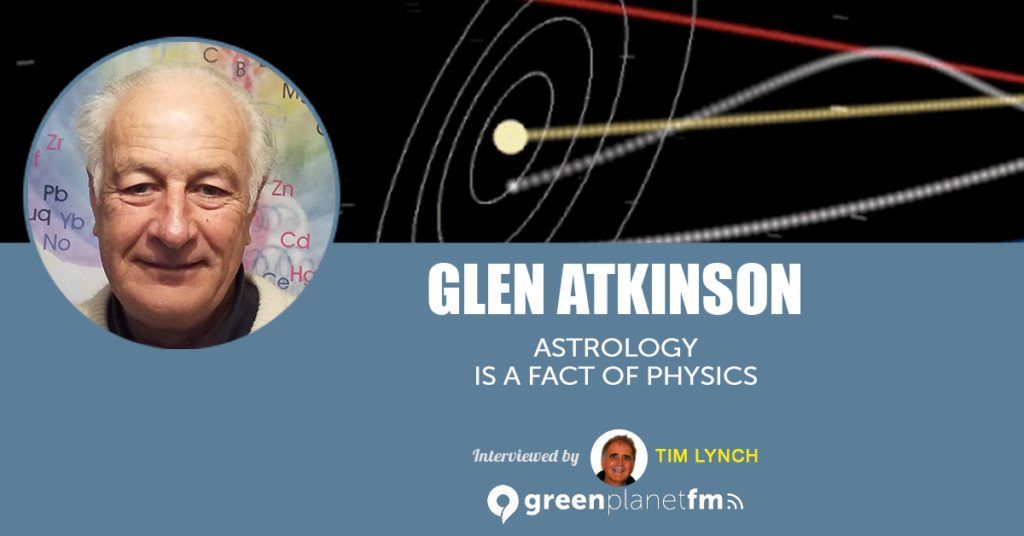 In this interview with Glen, first we cover his new revolutionary  ‘Periodic Table of Elements’ - that he has introduced to the world - that
will have all physicists and chemists - globally exclaiming - “why did I not think of that!”

Glen furthers this ‘new paradigm’ that is upon us - by saying that as astrology is a fact of physics he welcomes any physicist to challenge this statement
- but so far no one has stepped forward.

The global elite who control the world wide media use this media to put down astrology at every turn. Yet, behind our backs the establishment will always
draw up a chart when their babies are born. Whilst these same ruling class will always check their chart or their countries chart before going to war
or making a large incursion into a market, or change of government etc.

Thus they have contained and closed down the whole subject, that even academia and intellectuals shy away from it, for fear of compromising their occupation
within the upper echelons of education and universities. (except in India).

As Nikola Tesla once stated.

“The day science begins to study non-physical phenomena, it will make more progress in one decade than in all the previous centuries of its existence.”

Glen welcomes input from physicists to look into this ancient of sciences to reinvigorate the debate on its efficacy.

In following up on this statement that astrology is a fact of physics - we have been told (programmed) that astrology is basically a witchcraft belief
- and that ‘you have to believe in it’ - and he says that is not true at all. Saying that astrology is based on real things. Like
the stars - that they are real things that are emitting real electro magnetic forces and we ‘live in the middle of this field’ of star force …
and the old, but true saying that there are as many stars in the sky as there are grains of sand on the earth - and he says if we imagine that - then
we have all these ‘beams of force’ that have been constant for billions of years that they create this sort of holographic energetic field and with
that we have got the solar system moving - and we have this again like an atom - we’ve got the sun in the middle and we’ve got these sort of energetic
magnetic spheres that in the atom will have the electrons all organised - whereas in the solar system we have planets that are ’sitting there’ spinning
and condensing matter that has come from the sun but as they move around inside that magnetic shell - they change the form of that shell and so the
star light that’s coming through those planetary shells are hitting different ’tones’ - so it’s like the difference between C sharp and C minus - let’s
say Mercury moves around its shell - it warps that shell and so the tone coming from that ’star force’ is altered as it comes through there - and that’s
what we receive - we receive that electromagnetic variance on the earth - here. So as the planets move they alter their magnetism within our solar
system - and matter follows magnetism - so as the magnetism changes - so does the matter change.

So there’s a direct relationship between the movement of the planets and the effect on Earth.

Now within the ‘Biodynamic’ agricultural movement there are a few people who have done this work - but there is a particular book - called moon and planet
- by Agnes Fyfe (http://garudabd.org/wp-content/uploads/sites/garudabd.org/files/BDAGEarthAstrolgy3.pdf)
- and this group have been involved in a method called chromatography - where they get the sap of a plant and they ‘rise it up through blotting paper
and then they rise up silver nitrate and then they expose that to the light and it develops a picture - and it shows us the qualities of the sap of
the plant at the time it was picked. So she did these trials over many years and every so many hours. That what she found was the direct relationship
between the movement of the planets and the change in the plant sap. So she showed this direct correlation that plants are completely affected by the
movements of the planets. Glen stresses that Astrology has been doing this for 5,000 years and astrologers have been watching this direct relationship.
Whereas he has been doing this for 40 years - that there is a tremendous body of knowledge of what the influence of the various planets are - when
they are in certain positions and in certain relationships with another planet. So he says there is a very ‘worked up science’ of these effects and,
emphasising  - there is no belief here. This is a direct relationship between the state of the field of the solar system and what is happening
on earth - stating emphatically - there is no belief here.

In this interview: Tim mentions - that the global elite use astrology whilst publicly putting it down - and Glen concurs. Stating
that astrology is a fact of physics and is scientifically true and we have a society that wants to base itself on scientific fact, yet deny the very
basic fact of magnetism and matter. So this is an immense hypocrisy that science is perpetrating on ‘we the people.’ Where he says they will use it
- they know it works - it’s a fact of physics and then they come along and try to fool people that it’s all fantasy. He calls it a huge fraud that
the scientific community are perpetrating.

Yet, Nancy Reagan wife of US President Ronald Reagan, used the services of Joan Quigley to assist her with helping her husband at many levels during his
Presidency. In an interview, Quigley mentioned that over the next seven years, she issued guidance, for pay, that went far beyond mundane scheduling
to matters of diplomacy, Cold War politics and even the timing of the president’s cancer surgery.

Glen says astrologers are endeavouring to bring 'consciousness' into a very unconscious realm. He says the greatest next step in human development will
be when everybody starts to use astrology and that now with Astrology.com and Astro.com - all the information is now freely available to anyone with
a computer. Stating that it is a very simple language based upon the 9 planets and the sun - (the moon being classified as a planet) there are only
10 planets in the whole game. So all the information now is essentially at our fingertips. Please listen - there is so much information in this interview … far too much for me to type up … Glen talks about Venus and Mars and the times that they are in-synch and then the other times when they are in opposite situations - we get an understanding of how this all comes about - by looking at the position in the sky of these planets.

He
talks about depressed people and what influences and planets can cause depression - that you may have three instances of planetary events influencing
you over a very short period - but you can map out when this ‘transit’ passes - this, is a great relief. Meaning you are not going to be in a depressed
situation for life. As all things must pass.

Previous Lives
Glen talks about transits - and he also broaches previous lives or reincarnation as
he expands on the vastness of this cosmology. That it is not just luck - that your birth chart is not just a bad lottery draw - it is actually a result
of all of our past lives - be it a million or only a few … stating that our spirit is this eternal being - that moves
from one life to the next and every experience we have - it’s like we put a T-shirt on - like been there and done that!  So we wind all
of this experience into and around our eternal spirit - and that becomes our sort of personality - and our psychology - and all of our neuroses - and
all that is wound up in what we call the astral body - and he says this is what astrology is. It is the theology of the astral body - and this is related
to the planets. The stars are the spirit realm and the planets are what we call the astral realm - and all of our experiences from the past are accumulated
and that is what’s imaged in the birth chart.

Now from birth we have the ability to alter that field of activity and it is through our will, if we have a habit that we don’t like - our will says I
am going to change this - I am going to physically force my physical body to do something else - and in forcing the physical body the energetic body
has to shift - the matter sort of alters the magnetism as it were. Rather than the other way round. And so by doing that 10,000 times we form a new
habit - so we have forced our astral body into a change - so that is the point of life. So this IS the place that we have the opportunity to reorganise
this energetic psychology that we have - and so the birth chart is just the starting place.

Listen - Glen talks about progression - he also says fortunately for us the planets in the sky are predictable - listen ...

You choose your parents and country of birth too.

Quickly covered were other subjects that you can research for yourself.

The rewriting of the Bible by Constantine at the Council of Nicea and the elimination of reincarnation out of the Bible. https://probe.org/was-reincarnation-ever-in-the-bible/

Some would say an empty body ...

There was a huge amount of information given. This is some of it, below.

Questions that I never got around to asking were:

That Chartres Cathedral in France has the 12 signs of the zodiac as stained glass windows.

How does each planet have its characteristics embedded into their planet’s respective influences?

I encourage you to listen - and then use the two astrology websites to get a basic understanding of what your birth sign is. Then find yourself a good experienced astrologer.

I apologise to you dear reader and also Glen for this very hasty write-up on this important subject. I have so much to do within the time constraints.

ps I do not know where that numbering sequence comes from on the left hand side of the page??